The Giant peacock moth, Saturnia pyri, is the largest moth flying in the Picos, Spain and Europe. Its wingspan width can reach 150mm, leading some to mistake it for a small bird. 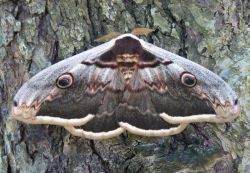 Orchards are good places to look for these monsters as the larvae feed on the leaves of the fruit trees. 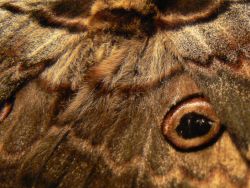 As in the peacock male bird the Giant peacock moth sports similar eye markings on the wings, though in this case both sexes have them.

The whole body and head appear furry (and in fact are) with the abdomen and tip of head a snowy white. The hairs stop about half-way down the legs. Antennae are feathery, wider in the male (seen here) than the female. 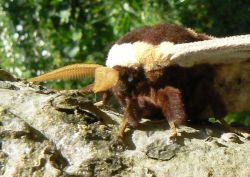 Around the Picos de Europa the Giant peacock moths are on the wing in May.

Flora and Fauna of the Picos de Europa

Over the past 25 years, Teresa Farino has compiled a report (more than 100 A4 pages) that includes lists of all the mammals, birds, reptiles, amphibians, butterflies, dragonflies, beetles, grasshoppers & crickets and vascular plants ever recorded the Picos de Europa, plus summaries of each of these groups and an eight-page introduction to the natural history of these mountains. If you would like to purchase a copy, the price is 17.50€, excluding postage and packaging; alternatively, a copyrighted PDF document sent by email costs 11.50€. Click on the image to contact Teresa for further details or to place your order.